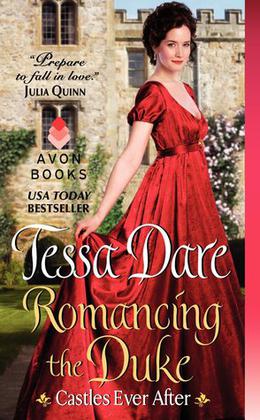 Romancing the Duke (Castles Ever After #1)

In the first in Tessa Dare's captivating Castles Ever After series, a mysterious fortress is the setting for an unlikely love . . .

As the daughter of a famed author, Isolde Ophelia Goodnight grew up on tales of brave knights and fair maidens. She never doubted romance would be in her future, too. The storybooks offered endless possibilities.

And as she grew older, Izzy crossed them off. One by one by one.

Now Izzy’s given up yearning for romance. She’ll settle for a roof over her head. What fairy tales are left over for an impoverished twenty-six year-old woman who’s never even been kissed?

This one.
more
Bookmark Rate Book
Amazon Other stores

The 'Castles Ever After' series

Similar books to 'Romancing the Duke'

All books by Tessa Dare  ❯

Buy 'Romancing the Duke' from the following stores: