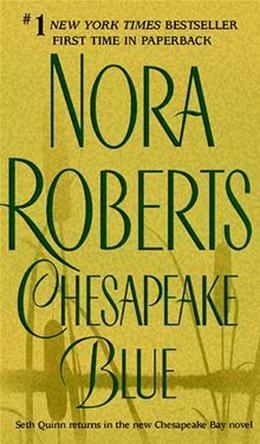 It's been a long journey. After a harrowing boyhood with his drug-addicted mother, he'd been taken in by the Quinn family, growing up with three older brothers who'd watched over him with love.

Now a grown man returning from Europe as a successful painter, Seth is settling down on Maryland's Eastern Shore, surrounded once again by Cam, Ethan, and Phil, their wives and children, and all the blessed chaos of the extended Quinn clan. Finally, he's back in the little blue-and-white house where there's always a boat at the dock, a rocker on the porch, and a dog in the yard.

Still, a lot has changed in St. Christopher since he's been gone--and the most intriguing change of all is the presence of Dru Whitcomb Banks. A city girl who's opened a florist shop in this seaside town, she craves independence and the challenge of establishing herself without the influence of her wealthy connections. In Seth, she sees another kind of challenge--a challenge that she can't resist.

But storms are brewing that are about to put their relationship to the test. Dru's past has made her sensitive to deception--and slow to trust. And Seth's past has made him a target of blackmail--as a secret he's kept hidden for years threatens to explode, destroying his new life and his new love...
more
Amazon Other stores
Bookmark  Rate:

'Chesapeake Blue' is tagged as: