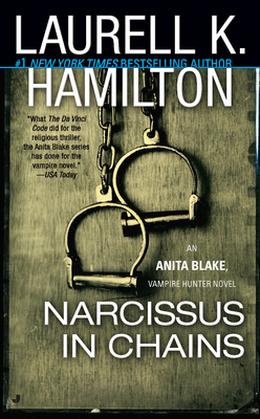 Hamilton's vampire-hunting Anita Blake faces a plethora of foes in her tenth outing. Just returned to St. Louis after six months away, Anita is still no closer to choosing between her lovers--Jean-Claude, a vampire, and Richard, a werewolf. But she has to rely on both for help after two of the wereleopards that she has been watching are abducted at a seedy club called Narcissus in Chains. Anita and her boyfriends rescue the wereleopards from the sinister people holding them, but Anita is wounded in the fight and put at risk of becoming a wereleopard herself. Richard angrily captures the wereleopard he believes is responsible and threatens to execute him. Anita must now rescue that wereleopard from Richard and the werewolves he leads, even as she mourns the apparent end of her relationship with him. Then she realizes that those who kidnapped the first two wereleopards are targeting other lycanthropes. Maybe she will be next. With plenty of steamy sex and graphic violence, this is engaging reading for vampire cultists.
more
Bookmark Rate Book
Amazon Other stores

Similar books to 'Narcissus in Chains'

Buy 'Narcissus in Chains' from the following stores: