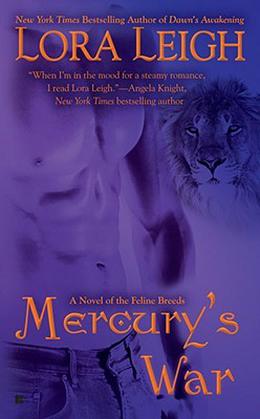 Nothing matches Lora Leigh's latest entry in the series about genetically altered Breeds with feline DNA, and the humans who awaken their desire.

Someone has been slipping the Sanctuary's secure information to a pharmaceutical company. Now it's up to Ria Rodriguez to pose as a clerk and uncover the leak. Yet she has no idea of the danger she's about to encounter, or the passion she's about to ignite in one of the greatest Breeds ever created.

Years ago, Mercury Warrant -- who, according to his file, is one of the greatest Breeds ever created -- thought he lost his mate, and he's had to live with the idea that he'll never know true bonding. Then he's tapped to protect the mysterious Ria -- and finds himself falling in love.

But Ria is a woman of many secrets, and she fears being consumed by her feelings for Mercury. Little does she know that she has every right to be afraid. Because the woman believed to be Mercury's true mate is back from the grave, and she's not about to let Ria -- or anyone else -- get in her way...
more
Bookmark Rate Book
Amazon Other stores