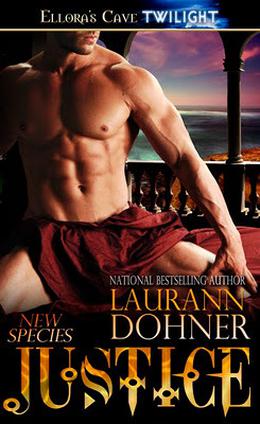 Justice North is the face of New Species. Seeing him up close makes Jessie's heart race. He's the ultimate alpha male-big, muscular, exotically beautiful...and dangerous. Of course he's off limits. But then the sexy man purrs and all bets are off.

Jessie Dupree is a mouthy, fiery human female who brings out the animal in Justice. She wants to show him how to relax, and he's all for anything she wants to do, but Justice has sworn to protect his people and to take a Species mate. He's torn between the woman he wants and the oath he's taken.

Jessie knows a relationship between them probably won't end well; heartbreak is inevitable. But that won't stop her from freeing the wildness inside Justice and spending every moment she can steal wrapped around his hot body, making him roar with passion.


Reader Advisory: Each New Species book may be read as a standalone, but we suggest reading them in order to get the most enjoyment from the series.
more
Bookmark Rate Book
Amazon Other stores

Buy 'Justice' from the following stores: