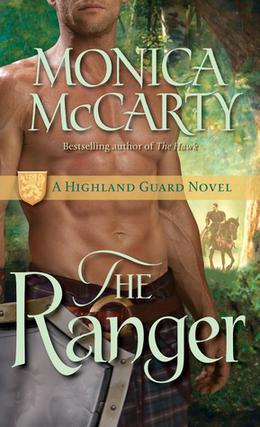 Chosen to help Robert the Bruce in his quest to free Scotland from English rule and claim his crown, the legendary team of warriors known as the Highland Guard battles on.

Embedded deep behind enemy lines, Arthur “Ranger” Campbell is prized for his razor-sharp senses and his ability to blend into the shadows. But when Arthur infiltrates the clan of the chieftain who murdered his father, his heart is locked on revenge. Inside he faces unexpected resistance from the sweetest of obstacles—a honey-haired siren who is his enemy’s daughter.

Intrigued by this ruggedly handsome newcomer to her father’s forces, the vivacious, enchanting Anna MacDougall is a woman whose skill at uncovering deception rivals Arthur’s own. Though yearning for a quiet life with a good man to love, Anna is drawn to this mysterious knight whose eyes devour her but whose words push her away. As danger, treachery, and the threat of looming war draw them closer into each other’s arms, a warrior made of steel must make a choice from the heart: love or revenge.
more
Bookmark Rate Book
Amazon Other stores

Similar books to 'The Ranger'

Buy 'The Ranger' from the following stores: