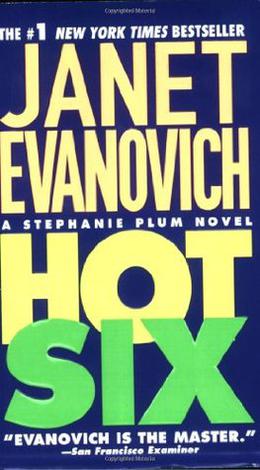 Low-rent bounty hunter Stephanie Plum reaches depths of personal experience that other women detectives never quite do. In Hot Six , for example, a sequence of new and hideous cars bite the dust; she finds herself lumbered with a policeman's multiply incontinent dog; and she has several bad skin days. All this when she is trying to prove her distinctly more competent colleague and occasional boyfriend Ranger innocent of a mob hit; avoid the heavies trailing her in the hope of finding him; and cope with a wife-abusing bail defaulter with nasty habits, such as setting Stephanie on fire. The peculiar joy of this series is the comic sense of place; Plum's New Jersey is one where everyone you meet, even the most dangerous of criminals, was at school with you, or stole your mother's first boyfriend, or gave your great-aunt a middling good recipe for meatloaf. Evanovich has built up an attractive cast of comic characters with Stephanie's extended family and those of her two boyfriends, the dashing and sinister Ranger and Joe Morelli (the cop whose family are only too keen on his marrying Stephanie). Hot Six will not disappoint either her fans or newcomers. -- Roz Kaveney
more
Bookmark Rate Book
Amazon Other stores