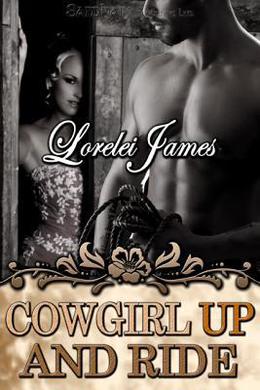 Cowgirl Up and Ride (Rough Riders #3)

Ridin' the edge of lust is fun--until someone falls in love.

Goody-two boots AJ Foster has waited her entire life for her dream cowboy Cord McKay to see her as more than the neighbor girl in pigtails. Now that she's old enough to stake her claim on him, she's pulling out all the sexual stops and riding hell-bent for leather--straight for his libido.

Divorced rancher Cord has sworn off all women...until innocent AJ suggests he teach her how to ride bareback--and he realizes she doesn't mean horses or bulls. Between his responsibilities running his massive ranch, missing his young son and dealing with the sexual shenanigans of his brother and cousins, Cord is more than willing to take AJ up on her offer. On a trial basis.

The fun and games tie them both up in knots. AJ isn't willing to settle for less than the whole shootin' match with her western knight. But for Cord, even though the sexy cowgirl sets his blood ablaze, he's determined to resist her efforts to lasso his battered heart.

Sweet, determined AJ has the power to heal--or heel--the gruff cowboy...unless Cord's pride keeps him from admitting their relationship is more than a simple roll in the hay.

Similar books to 'Cowgirl Up and Ride'

Spun Out
Spun Out
(Blacktop Cowboys #10)

All books by Lorelei James  ❯

Buy 'Cowgirl Up and Ride' from the following stores: