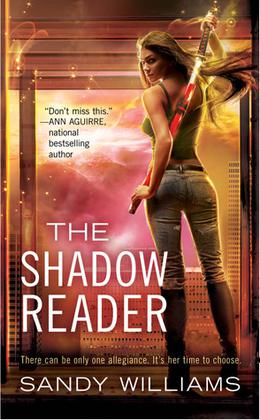 There can only be one allegiance.
It’s her time to choose.

Some humans can see the fae. McKenzie Lewis can track them, reading the shadows they leave behind. But some shadows lead to danger. Others lead to lies.

A Houston college student trying to finish her degree, McKenzie has been working for the fae king for years, tracking vicious rebels who would claim the Realm. Her job isn’t her only secret. For just as long, she’s been in love with Kyol, the king’s sword-master—and relationships between humans and fae are forbidden.

But any hope for a normal life is shattered when she’s captured by Aren, the fierce and uncompromising rebel leader. He teaches her the forbidden fae language and tells her dark truths about the Court, all to persuade her to turn against the king. Time is running out, and as the fight starts to claim human lives, McKenzie has no choice but to decide once and for all whom to trust and where she ultimately stands in the face of a cataclysmic civil war.
more
Amazon Other stores
Bookmark  Rate:

'The Shadow Reader' is tagged as:

Similar books to 'The Shadow Reader'

All books by Sandy Williams  ❯

Buy 'The Shadow Reader' from the following stores: