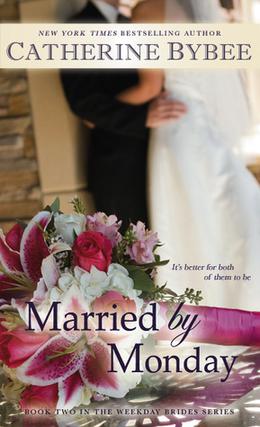 Married by Monday (The Weekday Brides #2)

Carter Billings:
Sandy blond hair and Hollywood good looks, Carter Billings could have any woman he wants. However, when he makes his bid for the Governor's seat in the state of California, he needs to settle down and become a family man. Eliza, the woman he secretly adores, embodies the perfect amount of spice and passion to suit his marital needs, but she's not interested in becoming Mrs. Billings. She can't even stand to be in the same room with him.

Eliza Havens:
It's much easier to drive Carter away than to give into desire. Matching couples is how she earns a living, but getting married isn't an option. The secrets she carries are too dangerous to entangle anyone else. When her hidden identity and past threaten her future, she's left with little choice. Carter is quick to offer solutions to both their problems, but saying yes could mean endangering the man she's growing to love.
more
Bookmark Rate Book
Amazon Other stores

The 'The Weekday Brides' series

Similar books to 'Married by Monday'

All books by Catherine Bybee  ❯

Buy 'Married by Monday' from the following stores: