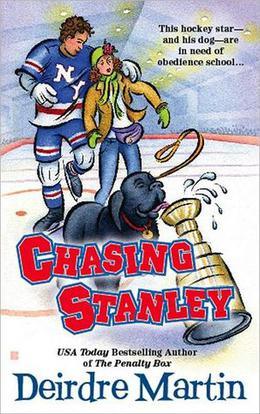 What do a New York City dog trainer and a pro hockey player have in common? They both love Stanley, an adorable but naughty Newfoundland...

When dog trainer Delilah Gould spots a rambunctious Newfoundland disobeying orders, she can't help but stepping in and teaching the gentle giant to heel. But it's his hunky owner she's really like to teach a few tricks. Too bad he's clearly the untrainable kind.

Professional hockey player Jason Mitchell is thrilled when he's traded to the New York Blades--the team of his dreams. There's just one problem: his pooch isn't adjusting to city life too well. Good thing he crosses paths with dog trainer Delilah Gould. At least that's what he thinks--until he realized he's fallen for her.

Now, with the season heating up, Jason realizes he'll have to score big-time to win the Stanley Cup and the woman who had tamed his dog and unleashed his heart.
more
Bookmark Rate Book
Amazon Other stores