An Affair with Mr. Kennedy (The Gentlemen of Scotland Yard #1) 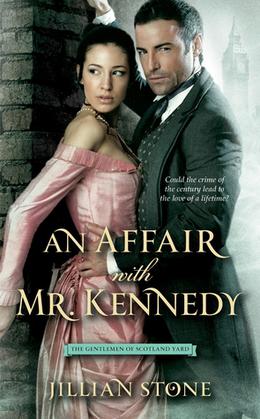 London, 1887. Part stoic gentleman, part fearless Scotland Yard man, Zeno "Zak" Kennedy is an enigma of the first order. For years, the memory of a deadly bombing at King's Cross has haunted the brilliant Scotland Yard detective. His investigation has zeroed in on a ring of aristocratic rebels whose bloody campaign for Irish revolution is terrorizing the city. When he discovers one of the treacherous lords is acquainted with his free-spirited new tenant, Cassandra St. Cloud, his inquiry pulled him unexpectedly close to the hear of the conspiracy -- and into the arms of a most intriguing lady.

Cassie is no Victorian prude. An impressionist painter with very modern ideas about life and love, she is eager for a romantic escapade that is daring and discreet. She sets her sights on her dour but handsome landlord, but after she learns their meeting was not purely accidental, she hardly has a chance to forgive her lover before their passionate affair catapults them both into a perilous adventure.
more
Amazon Other stores
Bookmark  Rate:

'An Affair with Mr. Kennedy' is tagged as:

The 'The Gentlemen of Scotland Yard' series

Similar books to 'An Affair with Mr. Kennedy'

More books like 'An Affair with Mr. Kennedy'   ❯

Buy 'An Affair with Mr. Kennedy' from the following stores: