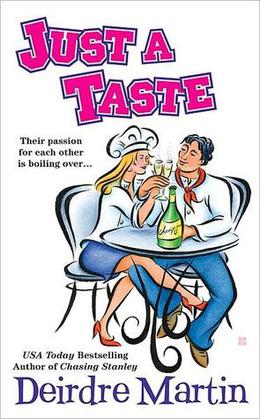 For delizioso pasta, go to Dante's. For a sumptuous Cordon Bleu, go to Vivi's.

To really heat things up, get them together.

Since his wife's untimely death, Anthony Dante has thrown himself into his cooking, making his restaurant, Dante's, a Brooklyn institution. So far, his biggest problem has been keeping his retired hockey star brother out of the kitchen. But now, a mademoiselle is invading his turf. And you know what they say: too many chefs spoil the neighborhood.

Stunning Vivi Robitaille can't wait to showcase her tastebud-tingling recipes in her brand new bistro, Vivi's. Her only problem is an arrogant Italian chef across the street who actually thinks he's competition. The table is set for a culinary war until things start getting spicy outside of the kitchen...
more
Bookmark Rate Book
Amazon Other stores

Similar books to 'Just A Taste'

Buy 'Just A Taste' from the following stores: