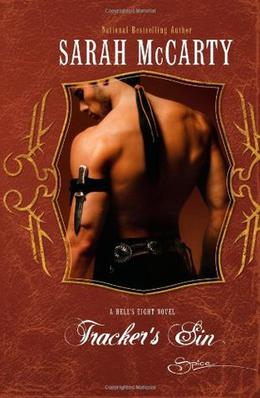 WED BY NECESSITY…JOINED BY DESIRE
Before his trade became his name, “Tracker” Ochoa was a scrawny Mestizo runaway. Now as fearsome as he once was frightened, he’s joined the notorious Hell’s Eight...and they have a job for him.

Tracker’s well-muscled bronze skin and dark, dangerous eyes are far more exciting than any of Ari’s former debutante dreams. In the light of day, though, his deep scars and brooding intensity terrify her. But he’s her husband and she’s at his mercy. With the frontier against them and mercenary bandits at their heels, Ari fears she’ll never feel safe again.

Tracker, too, remembers what fear feels like. Though he burns to protect Ari, to keep her for himself always, he knows that money, history—and especially the truth—can tear them apart.
more
Amazon Other stores
Bookmark  Rate:

'Tracker's Sin' is tagged as:

All books by Sarah McCarty  ❯