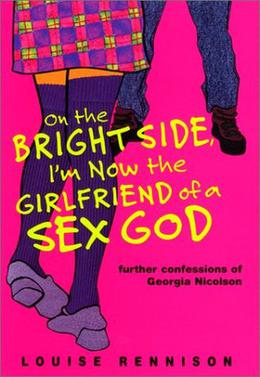 On the Bright Side, I'm Now the Girlfriend of a Sex God (Confessions of Georgia Nicolson #2)

You don't have to be a teenager to appreciate the humorous and often self-absorbed ravings found in 14-year-old Georgia Nicolson's diary, but it certainly helps. Now fans of Angus, Thongs and Full-Frontal Snogging -- Georgia's first set of hilarious musings on life -- can get another peek into the mind of this wryly inquisitive English lass in the appealing sequel: On the Bright Side, I'm Now the Girlfriend of a Sex God.


As the title implies, Georgia has snagged herself a sex god in the form of Robbie, the boy of her dreams. Now that they've indulged in a bit of "full-frontal snogging," Georgia turns her attention to advancing the relationship. But things quickly go wrong when she learns that her father's new job may necessitate a move to New Zealand. Crestfallen, Georgia feels her life might as well be over. Then, miraculously, the dreaded move is cancelled, and things seem to be getting better -- at least until 17-year-old Robbie decides to break up with Georgia because he's bothered by the difference in their ages.

Borrowing freely from her mum's closet and advice books, even as she's steadfastly discounting everything her mum says, a crushed but determined Georgia comes up with a scheme to win Robbie back. As usual, nothing goes as planned, and life is further complicated by Georgia's temperamental cat, Angus (who's having a few amorous leanings of his own), and her baby sister, Libby, whose fascination with (and lack of control over) her bodily functions leads to several intriguing mishaps. Of course, there are other disasters, too: a quick-tan lotion that turns Georgia's legs orange, a run-in with the aptly named Bummer sisters, and friends who insist on focusing on their own problems from time to time.

Who knew the angst of adolescence could be so much fun? This Georgia's-eye view of teenage life is wonderfully egocentric and side-splittingly funny. And despite the occasional language barrier (a glossary of terms is provided in the back of the book), Georgia's thoughts and experiences will prove universally recognizable to anyone who is, or has ever been, a teenager.

The 'Confessions of Georgia Nicolson' series

Similar books to 'On the Bright Side, I'm Now the Girlfriend of a Sex God'

More books like 'On the Bright Side, I'm Now the Girlfriend of a Sex God'   ❯

All books by Louise Rennison  ❯

Buy 'On the Bright Side, I'm Now the Girlfriend of a Sex God' from the following stores: