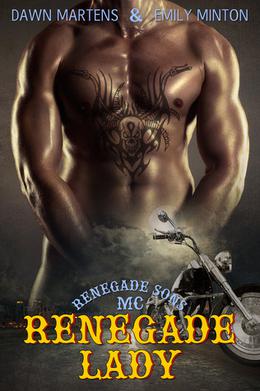 Jenna “Ice” Chandler grew up as part of a motorcycle club. She considered it her home, until one wrong move made it her prison. After months of abuse, she is rescued by Chipper, who takes her to Big Clifty, Missouri, home of the Renegade Sons MC.

Kiddrick “Kidd” Jones is the president of the Renegades. He knows there is something special about Ice the moment his older brother, Chipper, brings her into the club, but stays away, because she is too young.

When time comes for Ice to take her place in the club, she has two choices, become an old lady or a club whore. Not believing in love and knowing a man can never be faithful, she decides to earn her spot on her back.

With each passing year, Kidd's feelings for Ice grows and the urge to make her his becomes stronger. Frustrated and jealous, he finally decides it’s time to make her his.

Will Ice finally thaw out and give love a chance, or is Kidd fighting a losing battle?

WARNING: Renegade Lady contains adult situations some readers may find offensive. This is a raw and gritty story involving explicit sex, graphic language, violence and drug use. Not intended for readers under 18.
more
Bookmark Rate Book
Amazon Other stores

All books by Dawn Martens  ❯