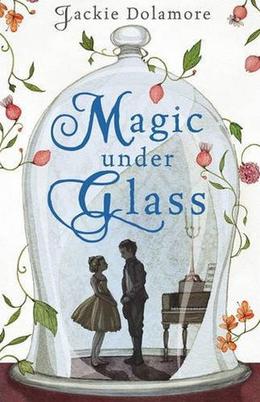 Nimira is a music-hall performer forced to dance for pennies to an audience of leering drunks. When wealthy sorcerer Hollin Parry hires her to do a special act - singing accompaniment to an exquisite piano-playing automaton, Nimira believes it is the start of a new life. In Parry's world, however, buried secrets stir.
Unsettling below-stairs rumours abound about ghosts, a mad woman roaming the halls, and of Parry's involvement in a gang of ruthless sorcerers who torture fairies for sport. When Nimira discovers the spirit of a dashing young fairy gentleman is trapped inside the automaton's stiff limbs, waiting for someone to break the curse and set him free, the two fall in love. But it is a love set against a dreadful race against time to save the entire fairy realm, which is in mortal peril.
more
Amazon Other stores
Bookmark  Rate:

'Magic Under Glass' is tagged as:

The 'Magic Under' series

Similar books to 'Magic Under Glass'

All books by Jaclyn Dolamore  ❯

Buy 'Magic Under Glass' from the following stores: