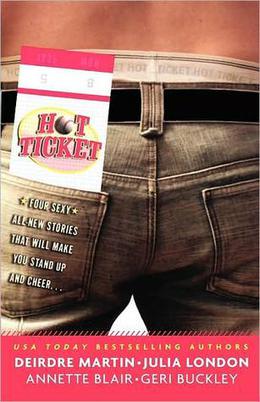 Deirdre Martin’s Same Rink, Next Year
Once a year, concierge Tierney O’Connor hooks up with the same hot goaltender at the hotel where she works. It’s a perfectly uncomplicated arrangement—until a blizzard turns their annual one-nighter into a lost weekend steamy enough to melt the ice.

Julia London’s Lucky Charm
Uninhibited radio host Kelly O’Shay loves to take on the egos of overpaid sports stars. Then she goes after hot-shot shortstop Parker Price, whose losing streak takes an unexpected turn when he goes head-to-head with his lovely nemesis—on-the-air and off.

Annette Blair’s You Can’t Steal First
Famous for his big numbers at bat, Juan Santiago’s struck out only once in his life—with Quinn Murdock. Now the Red Sox star player is getting one more shot with the sexy sporting goods magnate. But first he has to prove he’s not just playing the field.

Geri Buckley’s Can’t Catch This
Linda Hamilton got her two-timing boyfriend right where it hurts—by stealing his pricey tickets to the Florida Moccasins football game. When she discovers that the really interesting action is in the stands, it proves to be the hottest season opener on record...