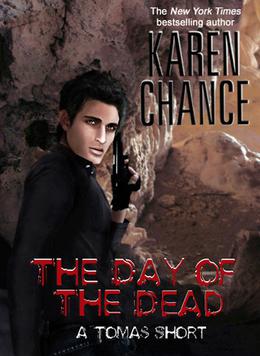 “The Day of the Dead” features Tomas, a character from the Cassandra Palmer novels, who was last seen cooling his heels in Faerie. He’ll show up again in the series, but what about in the meantime? What does a powerful, four-hundred-year-old vampire with a serious grudge against his old mass murdering master to do when he suddenly finds himself with too much time on his hands? Hang around Faerie, where there’s nothing to eat (Fey blood=nasty) just because our intrepid heroine parked him there?

Because Tomas is obsessed, and has been for pretty much his whole existence, with one thing: taking out Alejandro, the aforementioned murdering bastard. In “The Day of the Dead,” he slips back into our world to confront his nemesis, only to find unexpected help in the form of a band of magical mercenaries. Think the A-Team with spells and potions instead of (well, actually in addition to) guns and knives and things that go boom. It makes for a lot of mayhem down Mexico way.

NOTE: “The Day of the Dead” is a short story connected to the New York Times bestselling Cassandra Palmer series of urban fantasy novels. It was first published in The Mammoth Book of Vampire Romance (2008) and is now being offered as a free ebook. It features Tomas, a character from Touch the Dark (2006), the first Cassandra Palmer novel.
more
Bookmark Rate Book
Amazon Other stores

Similar books to 'The Day of the Dead'

More books like 'The Day of the Dead'   ❯

Buy 'The Day of the Dead' from the following stores: