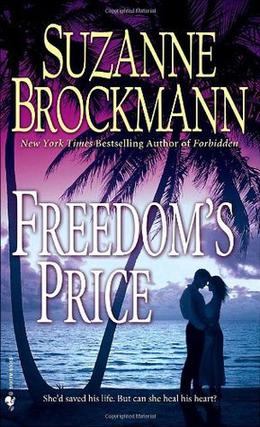 Could a revolutionary used to running wild win the heart of a world-weary journalist?

Liam Bartlett had nearly lost his life in San Salustiano, and for five years the correspondent had done his best to silence his ghosts.Â Â But when Marisala Bolivar arrived in Boston, all his memories returnedâ��along with a white-hot hunger for the young rebel who'd hidden him and kept him alive!Â Â Marisala ached for Liam's touch, so long forbidden but now hers to fight for with a woman's fierce need.Â Â Could a love once forged in fire at last burn true?

In this unforgettably sensual love story, Suzanne Brockmann creates a portrait of two daredevil survivors, tested by sorrow and bound by destiny to heal each other's wounds.Â Â A flame who beckoned him out of the darkness, she understood his pain as no one ever would, but could he soothe her hidden scars by offering her his soul?
more
Bookmark Rate Book
Amazon Other stores

All books by Suzanne Brockmann  ❯