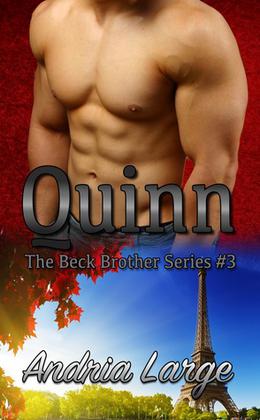 Quinn Beck is the kind of guy who keeps to himself. He’s quiet, reserved, and has this thing about being touched; he doesn’t like it. The reason? It’s the secret he’s been keeping inside for twenty years. Quinn has told no one what happened to him when he was ten. No. One. His plan is to take his secret to his grave, but his plan slowly starts to deteriorate when his boss hires a bubbly, outgoing, fidgety, drop-dead gorgeous woman from France, and sticks her in his office.

Margot Leclair moved to the U.S. in hopes to further her architectural and interior design career. Her new boss put her in the same office as his leading architect, who is a bit quirky, but extremely handsome, with his dark hair and dark eyes. Margot has a hard time keeping her eyes off of him. She also finds him intriguing and is curious about what makes him the way he is. She cannot help her growing attraction to him, even though she knows that he finds her irritating.

After almost a year of working together on a project and in the same office, their boss sends them on a trip to London for an Architectural Seminar. It turns into the trip from Hell that has Margot returning with a sprained ankle, and Quinn even more introverted than usual. Even after having the horrible trip, Margot wants to be with Quinn, yet he continues to fight their obvious connection.

When a death in Margot’s family sends them to France only days after getting home from London, an argument between Margot and Quinn sends him to a bar, where he decides to drink himself stupid. Will he reveal his secret to Margot while drunk off his ass, or will he close himself off even more? Can Quinn overcome his past to be with the one woman who wants him as is? Or will Quinn’s past come back to bite him and ruin everything he and Margot have together?
more
Amazon Other stores
Bookmark  Rate:

'Quinn' is tagged as:

The 'The Beck Brothers' series

Buy 'Quinn' from the following stores: