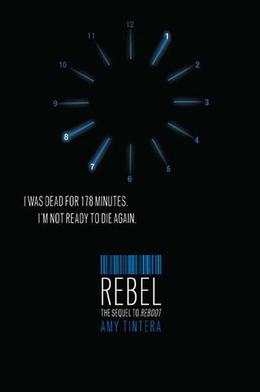 Wren Connolly thought she'd left her human side behind when she dies five years ago and came back 178 minutes later as a Reboot. With her new abilities of strength, speed, and healing—along with a lack of emotions—Wren 178 became the perfect soldier for HARC (Human Advancement and Repopulation Corporation). Then Callum 22 came along and changed everything.

Now that they've both escaped, they're ready to start a new life in peace on the Reboot reservation. But Micah 163, the Reboot running the reservation, has darker plans in mind: to wipe out the humans. All of them . Micah has been building a Reboot army for years and is now ready to launch his attack on the cities. Callum wants to stick around and protect the humans. Wren wants nothing more than to leave all the fighting behind them.

With Micah on one side, HARC on the other, and Wren and Callum at odds in the middle, there's only one option left...

It's time for Reboots to become rebels.
more
Amazon Other stores
Bookmark  Rate:

'Rebel' is tagged as:

All books by Amy Tintera  ❯

Buy 'Rebel' from the following stores: