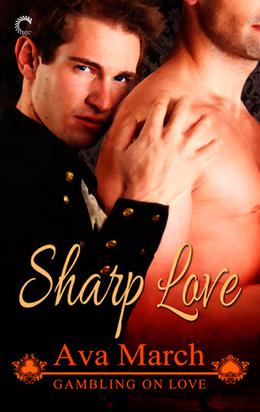 William Drake has lived among thieves, bastards and beggars all his life, doing what's necessary to survive. As a young orphan, that included looking after his best friend, Jack Morgan. But as they grew older, Jack took the honest path, leaving Will behind to fend for himself the only ways he knows how.

When an unsavory errand for his employer brings Jack back to London's underbelly, he needs Will's help. It's there, among the alleys they ran through as children, that the love he's always felt for Will returns. As their nights together grow hotter, Will discovers something new about his old friend—Jack's need to serve extends into the bedchamber.

Will has never fully abandoned his dream of escaping London with Jack. But what could the Duke's driver want with a dishonest cheat like him, beyond a bit of rough sex? It takes the gamble of Will's life to find out if he can win Jack's heart…

'Sharp Love' is tagged as:

The 'Gambling on Love' series

All books by Ava March  ❯