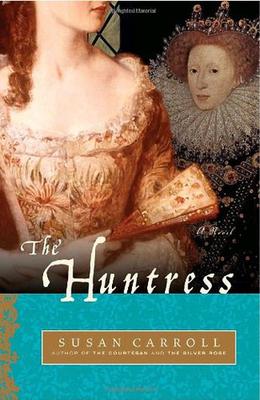 The Huntress (The Dark Queen Saga #4)

In a time of intrigue and betrayal, the Huntress is on a quest that could jeopardize two empires and two great queens: Catherine de Medici and Elizabeth I.

The year is 1585—and prophecy has foretold the coming of a daughter of the Earth whose powers are so extraordinary they could usurp the very rule of the Dark Queen herself, Catherine de Medici. Dispatched from Brittany to London, Catriona O'Hanlon, known as the Huntress, must find this mysterious young girl and shield her from those who will exploit her mystic abilities, which have the potential to change the course of history.

Catriona's skill with weaponry is all she has to protect herself and her young charge from spies who snake through the courts of Elizabeth I, the Virgin Queen—including the girl's own father, whose loyalties are stretched to the breaking point. But Catriona will soon face menacing forces and sinister plots unlike any she has ever encountered.

From Susan Carroll, the celebrated storyteller of historical fiction, The Huntress is an unforgettable portrait of power and passion—and one woman's courage to risk everything for those she loves.
more
Bookmark Rate Book
Amazon Other stores

Similar books to 'The Huntress'

Buy 'The Huntress' from the following stores: