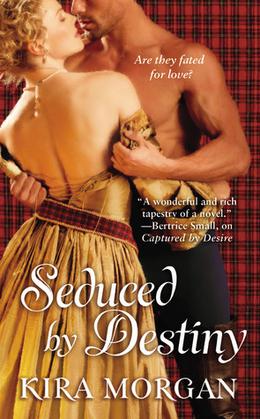 All her life, Josselin Ancrum has been trained for combat, hoping to exact vengeance for her heroic mother, who was killed fighting the English. When asked to spy for the Scottish Queen, Jossy joyfully accepts. But when a handsome stranger rescues her from sudden danger, his charm distracts her from her mission.

On the surface, Drew MacAdam may appear to be nothing more than a carefree champion, but his heart harbors a dark secret: This Highland hero is actually a skilled English soldier with a hatred for war and for the Scottish. Yet from the moment he meets the feisty Jossy, he's captured by her fiercely loyal heart. He's determined the honey-haired lass will be his ultimate prize - until the tragedy of their entwined legacies is revealed. Are these star-crossed lovers to be divided by their pasts? Or will they be...seduced by destiny?
more
Amazon Other stores
Bookmark  Rate:

'Seduced by Destiny' is tagged as:

Similar books to 'Seduced by Destiny'

All books by Kira Morgan  ❯

Buy 'Seduced by Destiny' from the following stores: