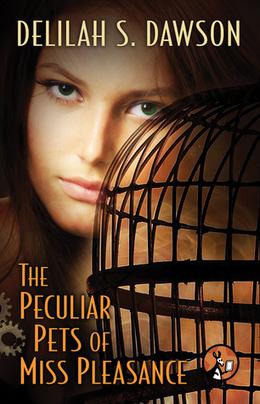 A lady with a penchant for pets meets a sexy fireman in this magical and saucy steampunk eNovella from the author of Wicked as They Come.

In a world ruled by blood, live pets are rare and kindness rarer still. London pet shop owner Frannie Pleasance has a mysterious way with animals and keeps her charges (and heart) locked in a veritable Eden. She thinks Casper Sterling is just another stray…until she takes in the troublesome lodger (and unwelcome suitor) and becomes the victim of a series of strange and dangerous occurrences.

When an unexplained fire threatens to destroy Frannie's carefully guarded world, firefighter Thom Maccallan is there to extinguish the blaze and help gather the lost creatures. The heat between Frannie and Thom begins to burn, but someone's still after the lady. Could it be Casper himself, or is Frannie’s new lodger just another victim of fate? Will they be able to figure out who's pursuing Frannie—and stop them—before she loses everything?
more
Amazon Other stores
Bookmark Rate Book

Similar books to 'The Peculiar Pets of Miss Pleasance'

More books like 'The Peculiar Pets of Miss Pleasance'   ❯

Buy 'The Peculiar Pets of Miss Pleasance' from the following stores: