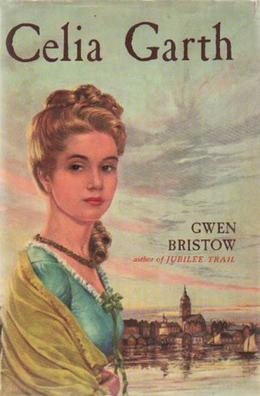 This is a story about a girl who wanted things to happen to her.

Celia Garth lived in Charleston, South Carolina, during the American Revolution. She had blond hair and brown eyes and a sassy face, and she worked in a fashionable dressmaking shop.

Things did happen to Celia, but not as she had planned. The king's army captured Charleston. The ravisher Tarleton swept through the Carolina countryside in a wave of blood and fire and debauchery. Caught up in the ruin were Celia and her friends -- the merry-minded Darren; Jimmy, whose love for Celia brought her into his tragedy; the fascinating Vivian, five times married; Godfrey, rich and powerful, who met disaster because he could control anything in town but the weather; the daredevil Luke.

Most people thought the Revolution was lost. Many Americans, like Celia's handsome cousin Roy, joined the king's side. Then out of the swamps appeared Francis Marion.

Marion was a little man. Marion was also crippled. But as Luke said of him, "When that man's leading a charge, he looks nine feet tall."

In the dressmaking shop, Celia became a spy for Marion. She sewed, she smiled sweetly, and in secret she risked her life sending information to this man that the king's whole army could not catch, the mighty little man to whom Tarleton angrily gave the name 'Swamp Fox'.

(from the front end flap)