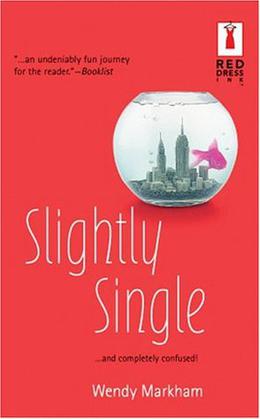 For every girl who's ever endured a long, hot urban summer on her own, Slightly Single is the summer breeze you've been waiting for!

A heat wave in Manhattan is enough to drive a girl crazy, and for Tracey Spadolini, a 24-year old New York transplant who's been "left behind" for the summer, there's even more to sweat about. Her Slightly Significant Other, Will, will be returning from summer stock in September, to pick up where they left off. (Or will he?)

But, in the days after Will's departure, Tracey decides it's time for a reality check. Her un-air-conditioned East Village apartment is a dump, her entry-level ad job sucks, her thighs don't seem to be getting any thinner, and Will seems to have dropped off the face of the earth. So, Tracey, with the help of her friends and one very attentive guy, decides to spend her summer reinventing herself . . . and taking a chance on liking the new woman she becomes.

A refreshingly honest account of universal female dilemmas, Slightly Single is an engaging story of one young woman's search for happiness.

'Slightly Single' is tagged as:

All books by Wendy Markham  ❯