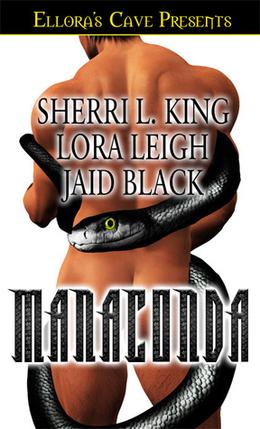 Sacred Eden - Sherri L. King: Cady and Obsidian, two greatly revered Shikar Warriors, know they share a love like no other. A love that will last forever. A love not even Death could interrupt. And now it's time to put that love to the ultimate test.for Death is on it's way.

Knight Stalker - Lora Leigh: A centuries old vampire, or is he? Bliss St. Clair comes upon the man of her dreams as his lethally sharp teeth are biting into another woman's neck. He's a vampire. But this one can walk in the daylight, a cross doesn't harm him, he's not dark and brooding, merciless or tortured. He's a charming bad boy with a rakish sense of humor and a wicked smile that heats every nerve ending in her body. And he wants her. Not for the blood that runs in her veins, not for the essence of her soul which makes her a perfect candidate to enter his world, he wants her because the passion she arouses in him sets his heart and his soul on fire. Now, Cadan Gaelan must protect the woman his heart has chosen, from the menace of the world he lives in. The Dark Knights who would tear her from him and use her from their own evil plans.Unless he can convince her to accept him and the secret of his vampirism.

Devilish Dot - Jaid Black: Dorothy "Dot" Araiza is a sex-toy maker by trade. One would think she has an active social life, but on the contrary, her existence is a rather boring, staid one. Dot dreams of finding her happily-ever-after, of being swept off her feet by Prince Charming - not to mention getting laid after eight pathetic years A lightning storm later, all Dot's fevered fantasies will come true. But Prince Charming isn't quite what she'd been expecting.
more
Bookmark Rate Book
Amazon Other stores

Buy 'Manaconda' from the following stores: