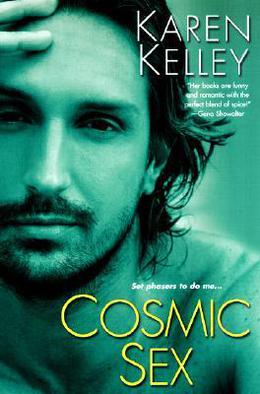 The truth is way out there.

Kia can't imagine why her cousin Mala left planet Nerak-utterly perfect in an ever-so-slightly boring kind of way-to go in search of Earth men. At least, not until she meets a virile, muscular human intent on rescuing her (how quaint!) from a bar brawl. And while at first Kia just wants undercover cop Nick Scericino to help locate her cousin, well, it would be a shame to come all this way without finding out whether everything really is bigger in Texas.

Nick knows trouble when he sees it. And right now, trouble is sitting at the bar-black-clad, sexy as hell, and about to mess up his sting operation to take down some Russian mobsters. Could she have mafia connections? Kia's certainly not like any woman he's known-flat out demanding sex, and following through with a sensational romp that leaves his mind blown and world rocked. Other options a) she's crazy, or b) she's not kidding about being an alien. In which case, he's in even deeper trouble. Because the only thing worse than falling wildly in lust with someone who's not playing with a full holodeck is the thought that she'll soon be leaving for a galaxy far, far away.

'Cosmic Sex' is tagged as: