Going Back for Romeo (The Curse of Clan Ross #1) 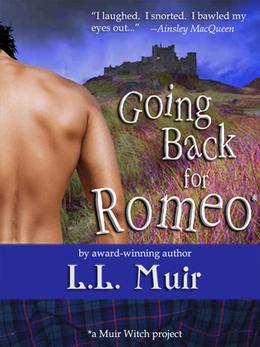 Alone, with a Highlander, in his castle, on a cold dark night...

Jillian MacKay is being conned by a pair of eighty-year-old witches. They’re convinced she’s the perfect sucker to test a prophecy and they’re willing to bury her alive to prove it. Once she escapes and finds herself in 15th Century Scotland, she believes her return home depends on a heroic deed—she must rescue a plaid-clad Romeo and Juliet before tragedy can strike. The monster standing in her way, however, is a handsome Highlander who might just be her own Romeo...a Romeo she must leave behind.

Rather than surrender his secrets, Montgomery Ross would prefer to go down in history as the heartless creature who betrayed one sister and buried the other alive. When he falls in love with the prophesied faery who has come to expose him, he'll have to learn a wee lesson from the star-crossed lovers or suffer the fate to which he once condemned them.
more
Amazon Other stores
Bookmark  Rate:

'Going Back for Romeo' is tagged as:

The 'The Curse of Clan Ross' series

Similar books to 'Going Back for Romeo'

Buy 'Going Back for Romeo' from the following stores: