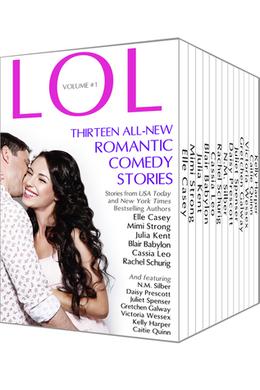 The Return of Ursula, A Peaches Monroe Short Story by Mimi Strong
Peaches Monroe returns to L.A., where there's trouble in paradise. Her new husband won't invite her to the film set of his vampire-drama TV series. Peaches doesn't take no for an answer.

The Real Deal by Elle Casey
When Melissa takes one last farewell tour of an internet dating site, and she sees a listing she can't ignore. She sends a quick note to the guy, congratulating him on his creativity. When he writes back, he makes her an offer that's ridiculous and impulsive, but what the heck ... you only live once, right?

Handcuffed to the Stockbroker by Victoria Wessex
Curvy Wall Street protester Alice handcuffs herself to Mason, a "suit" who represents everything she hates. Forced to spend the day together, the friction between hot-headed Alice and cool, gorgeous Mason soon explodes.

EDIBLE: The Sex Tape by Cassia Leo
Max Milan was destined for a decadent future. Then he made one tiny--epic--sex tape and it all came crashing down. Now he's trying to get back on his feet, trying to secure a deal that will put him back in the spotlight. Then she turns up.

Can't Stop Wanting You by Gretchen Galway
Jody Lapinski is a plus-sized chemist with a problem. The despicable Simon Brogan has moved into the upstairs unit of her house. In high school, Simon was an arrogant, heartless jerk. She's not going to forgive him now just because he's gorgeous and successful. Not after what he did.

Legal-i-Tease, A Lawyers in Love Short Story by N.M. Silber
Adam and Lily Roth are on their way to a romantic honeymoon in Rio de Janeiro. When they arrive, the last thing they expect is to be treated like celebrities. Can the newlyweds survive their fifteen minutes of fame and finally consummate their marriage?

Kiss Me Again by Juliet Spenser
High school English teacher Rachel Chapman spends her free time writing naughty love stories just for fun. When her notebook falls into the hands of sexy, fun-loving Tyler Kalinger, Rachel will do anything to get her secret stories back.

An Extravagant Proposal (Billionaires in Disguise: Charley) by Blair Babylon
Charley Parkhurst has been in love with moneyed, gorgeous Ford Dalio for five long years. When Ford whisks her away for a weekend in Paris to crash a royal wedding, Charley thinks he might finally pop the question, but Ford has other plans.

On The Road, A Ransom Short Story by Rachel Schurig
Daisy and Daltrey finally have a shot at happiness. They just have to handle a national tour, the pressure of fame, Daltrey's bickering family, a few crazed fans, and the lingering demons of Daisy's past. Easy, right?

Christmas Shopping for a Billionaire by Julia Kent
When Shannon is called to the mall to work as a sexy elf, her billionaire boyfriend, Declan, gets roped into playing Santa. The mall mommies start tweeting pictures, and soon everyone is crashing the mall to have a seat on Santa's lap.

Love in Tune by Caitie Quinn
Melissa Foehner is a rock star babysitter whose star has just disappeared. Now nothing will stop her from getting the show back on the road... Not even a broad set of shoulders and a smart mouth.

Take Two by Daisy Prescott
Maggie Marrion and Gil Morrow got a second chance at love. They discover the second time around is better than the first, especially when it comes to sex. Or at least it can be, with the help of magical blue pills.

Surprised By You by Kelly Harper
It’s a big day for tattooed rock star Haden Cooper. His girlfriend, Maggie, wants to bake him a cake. But everything goes wrong, and Maggie finds herself in the most unfortunate situation.
more
Amazon Other stores
Bookmark  Rate:

The 'Lawyers in Love' series

All books by Elle Casey  ❯