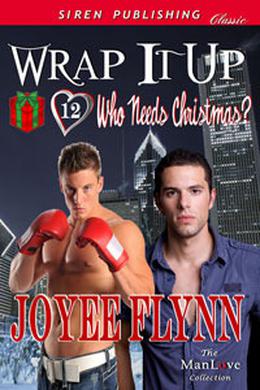 Twelve elves left the North Pole to be free of all things Christmas and have been living together for decades. They have gone without their mates for years, but when the first of the twelve finds his, the others have hope of finding theirs.

Shadow hates gifts, but that hatred is small compared to the loathing he has for vampires. Shadow is a skilled hunter feared by the vampire community. When Shadow meets Terry, he feels an intense attraction that thrills and frightens him.

Terry Christoff is a vampire who refuses to kill humans and has spent centuries hating the creature he is. Meeting Shadow could finally give him a chance to be human and find the love he has denied himself for so long.

Will Shadow and Terry learn to trust each other fully despite being enemies, or will they be unable to put their dark pasts behind them?
more
Amazon Other stores
Bookmark Rate Book

The 'Who Needs Christmas?' series

Similar books to 'Wrap It Up'

Buy 'Wrap It Up' from the following stores: