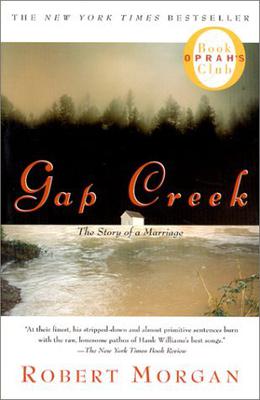 Young Julie Harmon works "hard as a man," they say, so hard that at times she's not sure she can stop. People depend on her to slaughter the hogs and nurse the dying. People are weak, and there is so much to do. At just seventeen she marries and moves down into the valley of Gap Creek, where perhaps life will be better.

But Julie and Hank's new life in the valley, in the last years of the nineteenth century, is more complicated than the couple ever imagined. Sometimes it's hard to tell what to fear most—the fires and floods or the flesh-and-blood grifters, drunks, and busybodies who insinuate themselves into their new life. To survive, they must find out whether love can keep chaos and madness at bay. Their struggles with nature, with work, with the changing century, and with the disappointments and triumphs of their union make Gap Creek a timeless story of a marriage.

A native of the North Carolina mountains, Robert Morgan was raised on land settled by his Welsh ancestors. An accomplished novelist and poet, he has won the James B. Hanes Poetry Prize, the North Carolina Award in Literature, and the Jacaranda Review Fiction Prize. His short stories have appeared in Prize Stories: The O. Henry Awards and New Stories from the South, and his novel The Truest Pleasure was a finalist for the Southern Book Critics Circle Award for Fiction.
more
Bookmark Rate Book
Amazon Other stores