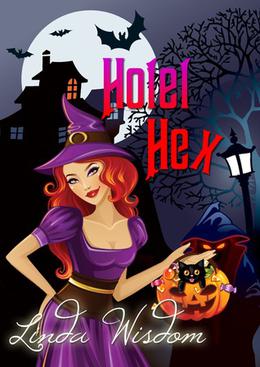 One Hex of a Weekend

Clue Meets Bewitched and Nancy Drew With a Touch of Hex!

It was all planned. A weekend away at an exclusive hotel in the Hollywood Hills where vampire PI Nick planned to have some alone time with his hexy honey, Jazz.

Except Stonegate Manor isn’t what it appears to be.

Jazz isn’t impressed. The hotel doesn’t boast spa facilities and that seriously upset magick bunny slippers Fluff and Puff. A celebutante psychic is seriously ticking her off. And what’s going on with the rooms? Not to mention the old-fashioned bellhop is a zombie.

Where’s the romance with a kitchen that doubles as a slaughterhouse, guests turning into dry husks, and rooms that change in the wink of an eye. And what exactly is going on with the hotel manager?

There’s no relaxation this hellish weekend for Jazz and Nick as they search for clues on what’s going on at Stonegate Manor. And Jazz goes up against an ancient evil that just might be more than this hexy witch can handle.
more
Amazon Other stores
Bookmark  Rate:

'Hotel Hex' is tagged as:

All books by Linda Wisdom  ❯