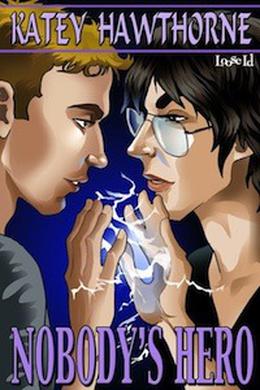 Jamie Monday lives in two different worlds. With his family, he's the golden child of awakened superpowered society. He's meant to do Great Things and pass on his powers -- with the appropriate girl, hand-picked by his mother.

He's already failed at the former, so he can't bring himself to tell her that the latter isn't happening, either.

With his friends, he's the social director and life of the party. He's also an out gay man with an appetite for the quick and easy lay. It's tough to have a relationship when you're hiding off-the-charts electrical powers, but Jamie doesn't mind.

Not until the prickly, paddy rocking, geeky-hot new guy at work shows him what he's been missing, anyhow. Kellan Shea's singular combination of dirty mouth and pure soul makes Jamie spark right from the beginning. To break through Kelly's defensive front and get to the gentle heart inside, Jamie will have to reconcile his split life: come to terms with his past, his family, his powers, even his nightmares.

Easier said than done, but if Jamie doesn't step up and own the truth, he could lose his love before it gets off the ground.
more
Amazon Other stores
Bookmark Rate Book