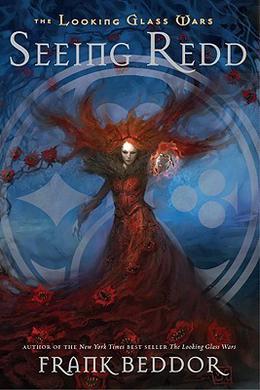 Alyss of Wonderland's rules has only just begun, and already those who prefer chaos to peace are threatening to destroy everything worth imagining. Trailed by newly appointed royal bodyguard Homburg Molly, Alyss is doing her best to keep pace with the non-stop demands of being queen while attempting to evade Molly for a few private moments with Dodge.

Alyss' life is a challenging mix of duty, love and tough decisions, and then a series of phantom sightings set fire to an urban myth of Her Imperial Viciousness' return and have everyone... Seeing Redd .

Has Redd somehow freed herself and her chief assassin, The Cat, from the confides of the Heart Crystal? If not, then who has resurrected Redd's brutal foot soldiers the Glass Eyes and set them loose to attack Wonderland on all sides?

'Seeing Redd' is tagged as:

The 'The Looking Glass Wars' series

All books by Frank Beddor  ❯