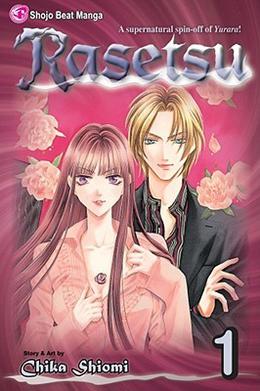 R to L (Japanese Style).
Rasetsu Hyuga works for an exorcist agency where she uses her special powers to banish evil spirits. There's a story behind the red flower mark on her chest though — it's a momento left by a powerful spirit who vowed to claim her on her 20th birthday. Unless Rasetsu can find true love by then, she is fated to become his.

Yako Hoshino, a young man with spiritual powers of his own, comes to the agency seeking help with a possessed book. He's seen a lot of strange phenomena in his day, but the last thing he expects to see is Rasetsu bearing a striking resemblance to his old love Yurura!
more
Amazon Other stores
Bookmark  Rate:

All books by Chika Shiomi  ❯