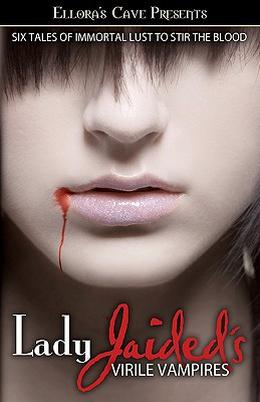 Not all vampires are dark, intense creatures of the night. In fact, the myth of the tortured soul certainly doesn't apply to Stefan Delouise, who lives a very nice life, thank you, as an entrepreneur and businessman. An enviable existence except for one little thing…he's totally unable to conquer the last challenge - Level Nine of that powerful online game he's addicted to.

Perhaps he needs some help from an unexpected source…

Ilsa was a woman on a mission.

Her quest was to kidnap and seduce the Crown Prince Loren el Ranuth and in exchange for her sacrifice, she would gain much-needed protection for her people. Unbeknownst to her, she'd kidnapped the wrong man…
Zane was no woman's toy…

As a venerated member of the Lorai, the vampire warriors, Zane is feared throughout the galaxy. He wakes from a drugged stupor to find the beautiful Ilsa calling him by his twin brother's name and offering herself to him sexually. Zane takes the beautiful woman to bed and unknowingly becomes a pawn in a dangerous game of power and succession.

Chicken wings, cheese fries, maybe a slice of pizza or two…this is where Leah's trouble begins. When she gets on the scale, she realizes her fondness for all things fried, dipped in chocolate, or smothered in cheese has become a hazard to her thighs. It's time to take matters into her own hands and feel the burn, or at the very least find someone who can help her to "find" the burn she can't seem to locate.

Leah hires a personal trainer and she's not at all worried about him seeing her flabby thighs, because all personal trainers are gay…or at least that's what she thinks until Erik comes to give her the workout of her lifetime. All four hundred and twenty years of that lifetime, that is.
Erik and Leah fall wildly in lust with each other. The chubby vampire is having the romp of the millennium, except for one small problem. She's falling in love with the very human Erik… And Leah's daddy hates humans…

My Fair Pixie By Samantha Winston

What does a five hundred year old, cultured male vampire want? Sebastian Montgomery Chateaufix stares at the mirror and wonders. His reflection eludes him as usual but that doesn't matter. What matters is that in five hundred years he hasn't found what eludes him—a soul mate.

But that is about to change.

He finds himself on The Mating Game after unknowingly sucking up Viagra with his meal. And as Sebastian is about to discover, Viagra + red wine + a Vampire = completely stoned. But that doesn't matter. He's met the pixie of his dreams!

Pixies, as everyone knows, are the trailer trash of the supernatural world. Vampires are the aristocrats. So when Jessica finds herself in front of her chosen one—a vampire who obviously lost some stupid bet—she has only one choice, to deck him. And she does.

It's love at first bite. But in order to live happily ever after, Sebastian has to pass Jessica off as an aristocrat to Queen Mabb and the fairy court at summer solstice. Jessica's education is about to begin.

That is, if she can get the bubblegum out of her bleached blonde beehive hairdo.

Ryal, a sexy Greek vampire, thinks it's her lucky day when she picks up Norse super stud Hayden Rolf in a bar. She's sure he's her reincarnated human lover, Highlander Ailig MacRory. All she needs to do now is convince Hayden that she's right.

Oh, and keep him from staking her…since Hayden just happens to be the baddest vampire slayer in the mid-Atlantic.

It doesn't help that master vampire Rubeus, Ryal's eternal enemy, is finally on to her. She stole the "Apple of Eris" — a charmed ruby conjured by the Olympian gods — from him centuries ago, and he has hunted her ever since.

Rubeus wants his ruby back.
He wants Ryal dead.
And he wants to kill Hayden/Ailig — just like he did five hundred years ago.

Surrender the Night By Blair Valentine

All books by Dakota Cassidy  ❯