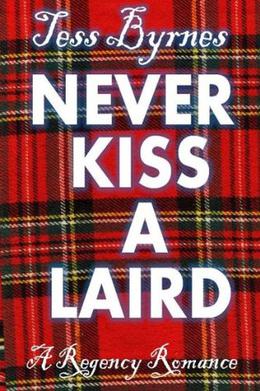 When a scandalous incident labels Sally Denham ‘that poor compromised Denham girl’ in the eyes of the Polite World, she is unable to convince anyone that she is innocent of the wicked rumours besmirching her name. Furious, Sally refuses to be sent in disgrace to her grandmother in Scotland, and escapes instead to a small cottage on the estate of Castle Kane. When her path crosses that of the handsome Laird, Sally cannot conceive of any reason why, having already been condemned as a fallen woman, she should not allow herself to… fall. But Sally quickly finds herself in one scrape after another, and the passionate dalliance she so recklessly embarks upon becomes the one tangle she does not want to escape.
In her second historical romance, Tess Byrnes give us another fun, light-hearted story with a sexy twist. Following her success with Waking up with a Viscount, Tess continues to delight with Never Kiss a Laird.
more
Amazon Other stores
Bookmark  Rate:

'Never Kiss a Laird' is tagged as:

Buy 'Never Kiss a Laird' from the following stores: