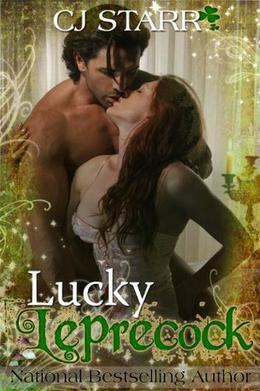 Excerpt: “Well, if it isn’t my own little leprechaun,” I heard, then a laugh. “Maybe I’ll get your pot of gold this time.”

I turned, and there, at the mouth of the alley, was Fionn. I hadn’t seen him since the year before, but I definitely remembered who he was. Hell, he’d inhabited my fantasies many a night when I pleasured myself, not just that first one last year.

He approached me slowly, quietly.

“Fionn,” I whispered, and he stopped only inches from me. He looked exactly the same as he had the year before. Even had on the same hat and overcoat.

“I missed you,” he said with a lopsided grin. “Thought I’d make it back before a year was out, but I got detained.”

I still barely knew him, but my body responded to him in ways I could not control. I wrapped my arms around his neck and pulled his head down for a kiss.

He didn’t fight it. I could tell he’d wanted it too when I did. It felt like the hottest kiss I’d ever had. The heat of him seared into me, consumed me. My breasts pressed against his chest, and my nipples formed tight peaks beneath the velvet of my costume. In a second, my panties had dampened, and I felt as if I could come just like that. I’d fantasized about this moment for 364 days, and now that it happened, it felt better than I had hoped.

But then Fionn reached down with one hand, lifted the hem of my skirt, and ran his warm hand up the outside of my bare thigh. Then he ran it across my hip, pushed it inside the waistband of my underwear, and delved a finger into my heated cunt. My clit, already hard and exposed, jumped at his touch, making my knees go weak. If Fionn hadn’t wrapped his other arm around my waist, I very well may have collapsed to the asphalt of the ground.

Instead, he held me, and stroked my clit and inserted a finger into my pussy, driving and stroking and spreading the juices around my lips as he did. His hand must be soaked, I thought. I’d never gotten this wet before.

His lips held mine, captured in their soft, demanding prison, and I could do nothing but give in to the onslaught of sensations coursing though my body. Our tongues tagged and retreated against each other. I forgot about the cold, about the work I had to do. All that existed in the world was Fionn and what he did to me. The hot length of his cock pressed against my thigh, separated by many layers of fabric, but burning and hard all the same. I thought of all the things I wanted to do to it.

'Lucky Leprecock' is tagged as: