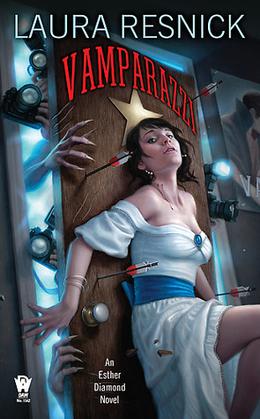 Everything you know about vampires is wrong, as struggling actress Esther Diamond discovers after taking a job as a victim in The Vampyre, an off-Broadway cult hit in Manhattan. Not only is she besieged by fang-wearing vampire groupies, fanatical anti-vampire activists, and the bloodsucking paparazzi, but she also has to put up with broody lead actor Daemon Ravel, who claims to be a real vampire. But when one of Daemon's fan girls turns up dead—and drained of all her blood—Esther is determined to help. She turns to her friend Max, a 350-year-old magician. Meanwhile, Detective Connor Lopez, Esther's ex-almost-boyfriend, is convinced that Esther herself is the blood-sucking killer's next target.

All books by Laura Resnick  ❯

Buy 'Vamparazzi' from the following stores: