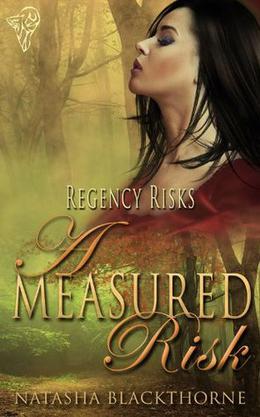 . .
*** NOTICE: This is edition one of a rewritten and republished work. This is not the version of A Measured Risk that is available in the Kindle Store. The text does not match. ***

He is her most dangerous temptation and now he is demanding her submission. Dare she take the risk?

Book one in the Regency Risks Series
Emotionally scarred in the horrific accident that took her husband's life, Lady Cranfield is imprisoned by her lingering terror of horses and carriages. She longed to be closer to the fascinating Earl of Ruel. She sensed intuitively that he could teach her how to overcome the terrors that held her in bondage.

And now she's willing to risk almost anything-her reputation, even her virtue-to find out. But what he proposes startles her.

When the shy, studious and socially awkward young widow approached him, Ruel instantly sensed she would be the sweetest, most submissive experience of a lifetime-if only he can gain her total and complete trust. He makes her a non-negotiable offer. His help in return for her submission and obedience.

But Lady Cranfield grew up neglected by her ducal parents, raised by servants and then later ignored by her handsome, charming husband. She's learnt to protect her heart at all costs and she trusts no one but herself.

How can the jaded Earl of Ruel break through her self-protective defences and show her how to love when he has spent his lifetime avoiding that tender trap?

Excerpt from A Measured Risk


"Why did you run away?" His deep voice settled in her belly, rich and warm, like crème brûlée on a cold winter's night.

"Because I wanted you to follow." She tried to sound sophisticated and seductive, but her voice choked off on the last word.

Ruel placed his hand on the shelf above her head and blocked her path to the door. His tall, solidly muscled body leaned over her, surrounding her with the sumptuous, sinful scents of tobacco, Scotch whisky and something masculine and undeniably dangerous. A slow, sensual smile stretched his hard mouth.

At the change, her insides seemed to flip over.

"Well, sweeting, getting us off alone was a very inspired idea." He touched one of her fallen ringlets. "I am bored to distraction with endless hunting and fencing."

As he slowly wrapped the curl around two fingers, he brushed her collarbone. Fiery sparks tingled down her spine, so intense that she shivered...
To read more, click on "Look Inside" up on the left side of this page.

'A Measured Risk' is tagged as:

Similar books to 'A Measured Risk'

All books by Natasha Blackthorne  ❯

Buy 'A Measured Risk' from the following stores: