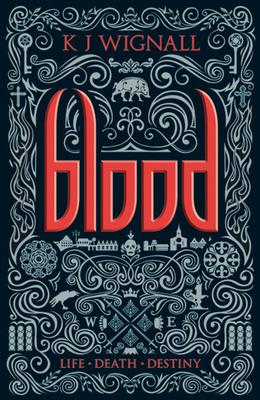 I do not remember being bitten. I wish I did, for then I would know the creature who did this to me and I would have a purpose, to track him down and repay him for the poisoned gift he gave me." Back in the 13th Century, Will was destined to be Earl of Mercia. He never lived to inherit his title, struck down by a strange illness and buried beneath the city walls. But Will was not dead, and only now, seven lonely centuries later, does he begin to understand that there was a reason for all of this, that he has a destiny. To find it though, he will need help, and as ever, he will need blood.
*SLJ Starred Review, Gr 8 Up -In 13th-century England, 16-year-old Will, heir to the Earl of Mercia, was attacked and bitten. In more than seven centuries as a vampire, he has spent years at a time in oblivious sleep and years awake, discovering piecemeal that the attack was not just a horrific accident, and that the repercussions are far from over. When he awakens in the 21st century, he is drawn instinctively to Eloise, a teen runaway, and he is certain she can help him. As other characters are introduced, suspense builds. Why does Jex, a vagrant, have Will's name scribbled among the mysterious writings in his notebook? Why does Will's long-healed bite wound flair and burn in the presence of cafe owners Chris and Rachel? The story ebbs and flows from the third person to Will's own riveting narrative detailing his tragic few encounters with people over the years and his evolving philosophy about his situation and God. Moments of levity keep the story from abjectness and serve to highlight the realistic, modern-day setting. A recurring joke is Will's ignorance of current parlance: "making out," "vegan," "ice hockey," "born-again Christian." Encounters with a shape-shifting villain, skeletal hands grasping from graves, whispering shadows reflected in mirrors, and a deadly chase through an Escher-esque cathedral library keep the elements of fantasy and drama high. Throughout this fast-paced and unique story, Wignall maintains a suspenseful, spooky mood with elegant, evocative prose. Enough loose ends are tied up to make for a satisfying conclusion, but a few tantalizing threads remain.-"Jennifer Prince, Buncombe County Public Library, NC
more
Amazon Other stores
Bookmark  Rate:

'Blood' is tagged as:

The 'The Mercian Triology' series

All books by K.J. Wignall  ❯

Buy 'Blood' from the following stores: