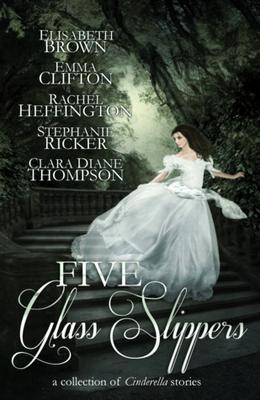 ONE BELOVED STORY, FIVE EXCITING WRITERS
A COLLECTION TO CHERISH

Here is Cinderella as you have never met her before, wearing glass slippers and off on unforgettable adventures!


WHAT EYES CAN SEE: Elisabeth Brown
Painfully shy Arella begs her stepmother to let her stay home from the prince’s ball. But kindly Duchess Germaine is determined that her beautiful stepdaughter should be presented at court along with her own two daughters. So, dressed in a gorgeous gown and a pair of heirloom slippers, Arella catches the eye of the crown prince . . . and finds her life suddenly far more complicated than she ever desired.


BROKEN GLASS: Emma Clifton
The slipper fits . . . but on the wrong girl! Rosalind never once danced with Prince Marius at the ball, for she is in love with his brother Henry. If only Rosalind and Marius would stop bickering long enough to invent a scheme, perhaps the three of them can find the real mystery lady. But they must work quickly, for dark deeds are afoot, and the kingdom is poised on the brink of disaster.


THE WINDY SIDE OF CARE: Rachel Heffington
Alisandra is determined to have her rights. She knows that she is the king’s secretly dispossessed daughter, the true heir to the throne. Prince Auguste is an imposter, and if she plays her cards right, Alis will prove it to the world! That is, if charming Auguste doesn’t succeed in winning her heart before she gets her chance . . .


A CINDER’S TALE: Stephanie Ricker
It’s a dangerous life, yet Elsa wouldn’t trade this opportunity to work at Tremaine Station, mining cendrillon from the seething surface of planet Aschen. Nevertheless, when a famous deep space explorer and his handsome son dock their starcraft at the space station, Elsa finds herself dreaming of far galaxies beyond Aschen's blistering heat. There is no time for dreaming, however, when danger threatens the space station, and Elsa and her fellow miners are tested to the limits of their courage.


THE MOON MASTER’S BALL: Clara Diane Thompson
After her terrifying experience there several years ago, the one place young housemaid Tilly longs to avoid is Bromley’s Circus. But when kindly Lord Hollingberry begs her to deliver a message to the mysterious Moon Master hidden away among the circus dwellers, Tilly can’t refuse . . . and finds herself ensnared in a web of enchantment cast by the loathsome Mrs. Carlisle and her beautiful goddaughter.
more
Amazon Other stores
Bookmark  Rate:

'Five Glass Slippers' is tagged as: