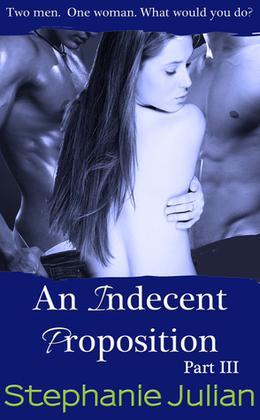 Keegan and Erik gave Julianne half-a-million dollars to sleep with them. Both of them. It was only supposed to be one night. But none of them were ready to end it.

After another night spent between the men, Julianne wonders if they can make a relationship work. Erik's scars, physical and emotional, are deep. Keegan battles a well of guilt that eats away at him.

But Julianne is nothing if not determined. But can she keep fighting Erik's and Keegan's pasts to bring them into the future?
more
Amazon Other stores
Bookmark  Rate:

'An Indecent Proposition' is tagged as:

Similar books to 'An Indecent Proposition'

Buy 'An Indecent Proposition' from the following stores: