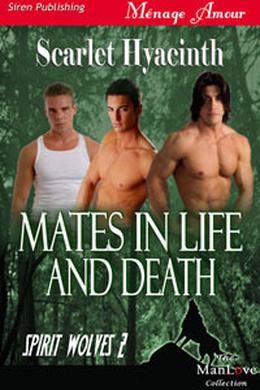 A hundred years ago, Caesar lost Linden to death and the feral virus. Now, finally recovering his memory in his new life as Daniel Lawson, he is overjoyed when he senses his mate once again. But upon their reunion, he runs into an unexpected surprise—their other mate, Ash.

A hunter of ferals, Ash doesn't know what to believe when he finds a human mate. Hearing about his brother Trent's mating gives him hope, but his world is shaken when Dan appears. Sorrows of the past linger between the three, straining a connection that is already difficult to understand.

But when dangerous revelations shatter every notion of their reality, Ash and Dan find themselves fighting side by side in a desperate attempt to keep Linden safe. Will they get a chance for a new life, or will death win the battle again?
more
Amazon Other stores
Bookmark  Rate:

'Mates in Life and Death' is tagged as:

Similar books to 'Mates in Life and Death'

More books like 'Mates in Life and Death'   ❯

All books by Scarlet Hyacinth  ❯

Buy 'Mates in Life and Death' from the following stores: