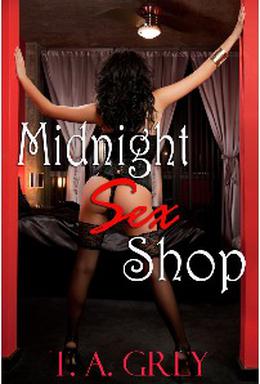 A sinister rumor has sent Detective Lina Blackmoore into the infamous sex club—The Midnight Sex Shop. The club whose motto Your darkest desire is our only pleasure is under tight scrutiny when an anonymous call is made to Lina’s precinct alleging that the Midnight Sex Shop is selling child pornography. Lina discovers that the club is owned by the dark and handsome, Cade Vanderoth, who will only work with Lina for a price…her body.

Lina quickly learns that Cade Vanderoth is a sexual dream, a man who unravels her every sexual fantasy as if he could see straight into her. Lina succumbs to him, and in his arms, experiences her deepest, rawest of sexual fantasies.

While passions bloom and love is realized, a dark presence lingers in the Midnight Sex Shop. As Lina struggles to solve the case, she begins to lose the battle over love. But can Lina learn to trust and can Cade overcome his inability to commit? Can these two hearts learn to mesh or will they falter and risk losing the greatest thing in life—love.

'Midnight Sex Shop' is tagged as: