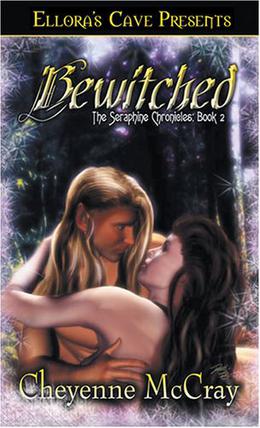 The Seraphine Chronicles - Bewitched By Cheyenne McCray Book 2 in The Seraphine Chronicles series Jalen, a Seraphine Elvin warrior, is assigned to protect Ranelle from the Sorcerer. Muscular and lithe, Jalen moves with masculine grace, easily blending with shadows and light. Never has he doubted his decisions or his skills. Never has he felt confusion or regret. Never has he failed at any task. Never...until Ranelle. It isn't long before Jalen believes the maid has bewitched him. Having Jalen deep inside her is more thrilling than Ranelle had imagined, and she can't get enough of her protector. But when she discovers that Jalen married her without her permission, she's outraged. Before he has a chance to stop her, Ranelle flees into Wilding Wood...and vanishes into the erotic Faerie realm. Jalen goes after his heartmate, determined to reclaim her once and for all.
more
Amazon Other stores
Bookmark  Rate:

'Bewitched' is tagged as:

The 'The Seraphine Chronicles' series

The Dark
The Dark
(Dark Sorcery #6)

All books by Cheyenne McCray  ❯

Buy 'Bewitched' from the following stores: