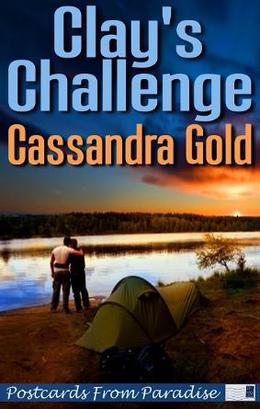 Tired of being judged by his appearance, Clay Pennington
decides the time has come for drastic action. Partying and
one-night stands have gotten old, but how’s a boy supposed to
find someone when nobody looks beyond his surface to the
man inside? A wilderness retreat seems like just the ticket
for proving he’s more than everyone else believes—until he
actually gets there.

Everything is a lot more difficult than he expected, including
the man he’s partnered with for the week. Sexy, surly Trent
Raines is a puzzle Clay would love to solve, but the man
pushes him away at every turn. Totally out of his element and
stuck with a survival partner who barely tolerates him, it’s
not long Clay starts to wonder if he’s made a huge mistake.

If Clay can get through the week, he just might find
himself… and a lot more.
more
Amazon Other stores
Bookmark  Rate:

'Clay's Challenge (Postcards from Paradise)' is tagged as:

Buy 'Clay's Challenge (Postcards from Paradise)' from the following stores: